The MMORPG revolutionary by ANet combining classic instances with massive online gaming to create one of the most original and phenomenal games ever.
Post Reply
43 posts

Love the transition between the animated part and the ingame engine. Looks sweet! =O
Humans don't have the patience to wait even ten minutes for something!
Top

As a great man once said...


I like the dragon as the 2, but I wish the actual text was a bit more stylish and I have already claimed the name "The Lorax" for a sylvari
I weep, I weep at my own idiocy, my favoritism, for the end of an era, the fall of a giant, I weep for the lost souls who rested upon it's shoulders, who found themselves beneath it's girth, for those who stand over the fallen behemoth refusing to let it die, I weep, for all who found safety and comfort in it's shadow and for all who depended on it's watchful gaze, in this world full of malice, in this world full of suffering, chaos and hatred... I weep

Looks like Zhaitan will be a pain in the ass to kill.
yuuki o misetsuketemo tsuyogattemo hitoei de wa iki.
Top

God I love their concept art. And the end scene where the Charr turns into an Effigy is pure badassery.
"I'll come to Florida one day and make you look like a damn princess." ~Hep
Top

Agreed with Dusk.
Hooray, I'm loving the looks of this.
Top

Rising_Dusk wrote:God I love their concept art. And the end scene where the Charr turns into an Effigy is pure badassery.

My jaw dropped when I saw this. The IGN logo ruins it someone help me find this picture without it. >_> 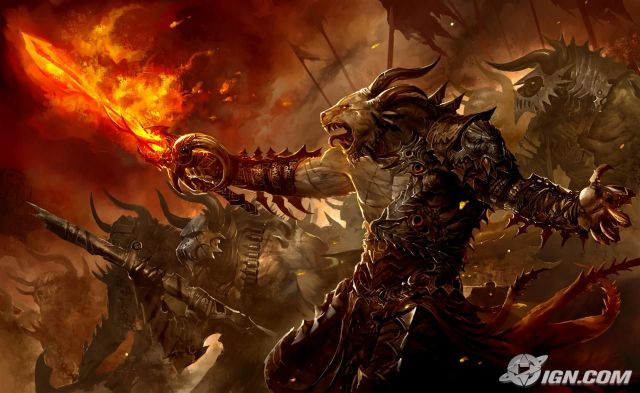 I'm looking forward to this more than any other game currently.
SELECT * FROM users WHERE clue > 0
0 rows returned
Top

DAMN!
all I can say
it looks friggin sweet

May God have mercy on your soul, for you shall find none here!
Top

Ugh...
Still so much to do in GW.
Cruor Vult

Hope, it is the quintessential human delusion,
simultaneously the source of our greatest strength, and our greatest weakness.

Soon we shall be One...joined in the Word.
Top

Tell me about it...I still have to finish Prophecies.

VZBushkiller20 wrote:Tell me about it...I still have to finish Prophecies.

lol, me too
Top

And hurray, still also has yet to finish prophecies!
Top

Prophecies is the best one by miles and miles and leagues.
How did you guys NOT finish it?
Top

I play the most boring class ever -- an elementalist. That's why I did not finish it.
Top
Post Reply
43 posts